The highly anticipated first entrance of Justice Ruth Bader Ginsburg to deliver what has become her signature off-the-bench talk, “Law in Opera,” begins off-stage left where a slight, frail shadow gets projected on the walls by the flashlight helping her on stage, then it grows to become enormous, thrilling, filling the wall and throwing the audience into wildly enthusiastic applause. This is the Ginsburg Effect. It was very much in evidence yesterday at the Castleton Festival tent. Judging by a full and exciting docket of programming – an afternoon talk, a play, a chamber concert, pre-show music/cabaret, and an evening bill of two comic operas – I am happy to report that Castleton Festival is alive and well as it enters its first full season without Maestro Lorin Maazel at its helm. Maazel died last summer on Sunday this very week. Stepping up as Artistic Director is his wife, the accomplished actress and director Dietlinde Turban Maazel. Some other remarkable “star” talents are assisting with the transition. 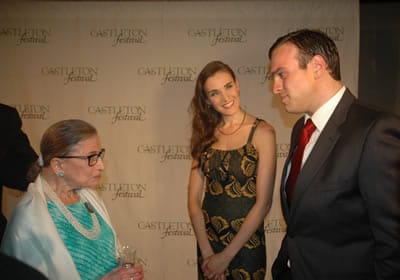 Enter the incomparable, notorious RBG, or, as we have come to speak affectionately of her, “the little Justice.” There’s nothing little or trivial about the Justice’s insights into the world of opera. Ginsburg introduces scenes from operatic repertoire that she has chosen in order to point out legal characters and issues that proliferate in the plots. Behind her demurred elegance, the Justice wields evidence of misaligned legalities with a deadly accurate foil, skewering both the characters in the operas and the current interpreters of our constitution who would choose “literal” v. “purposive” and “strict” rather than “sensible” readings of the law. In the opera Carmen, the young gypsy “negotiates a sort of plea bargain” to stay out of jail by singing the famous seduction aria “Habanera.” Following the scene, steamily performed by Taryn Holback and Daniel Noone, the Justice responds with soft-voiced enthusiasm, “A great beginning, don’t you agree?”

The justice next introduces the famous quintet from Marriage of Figaro, describing the librettist/composer (Mozart) as a “rock artist at the top of his form.” Legally, the barber, (sung beautifully by Jorge Belloni-Rosario,) narrowly escapes a forced marriage through the almost accidental discovery that the woman in question is sua madre. Throughout the afternoon’s program, we discover that the Justice is not only entertaining but schooling us on the law and legal institutions, including la droit du seigneur (right of feudal lords to “break in” all the young ladies in their fiefdom) and the perniciousness of feudalism. By ending with the scene fromPirates of Penzance, in which the hapless Frederic may be indentured as a pirate for most of his life on a technicality (his leap year birthday) and a strict reading of the law, the Justice has clearly made her case. Opera shows how the law can run amok and lead to tragedy or absurdity but does it so beautifully and often ends with a scene of great reconciliation. The Little Justice assures us that in the Judicial Branch of our government at least, if sadly not our legislative, the a tone of mutual respect is set, and reconciliation celebrates our great institutional processes. 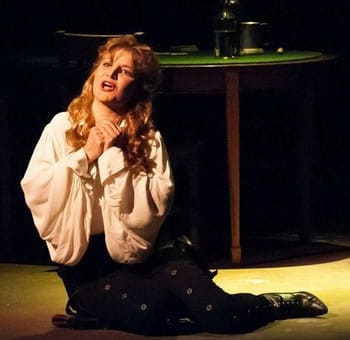 The scenes were performed on Saturday by the young artists of the CATS, the signature training program of Castleton Festival which attracts young singers, instrumentalists, conductors, and other artists in an intensive mentoring program by some of the world’s most accomplished artists throughout the four weeks of the festival. Opera (and other music-theatre) of tomorrow is in good hands. The entre-performances break may be one of the best reasons for a pilgrimage to Castleton. Whether you plan online to partake in the festival’s weekend “fine dining” offerings or bring and supplement your own picnic, the rolling green hills, studded as they are with midsummer rolls of hay, is more restorative than a day at the spa. I always include in my break to take a short walk towards the Theatre House to visit the animals, Dietlinde’s menagerie of beasties that include some randy goats, donkeys, ponies, a pig, a zebra and its equally wild companion and original “zonkey.” Maria Tucci, star of stage and screen, directed both operas on the evening’s bill. Conductor Salvatore Percacciolo won me over completely last season when he courageously stepped in and most successfully took up the baton for Maazel and conducted Don Giovanni. He wowed me again last night. Both Tucci and Percacciolo bring such verve to ignite the comic spirit of both Maurice Ravel’s rarely performed L’Heure Espagnole and the world premiere of Derrick Wang’s Scalia/Ginsburg. 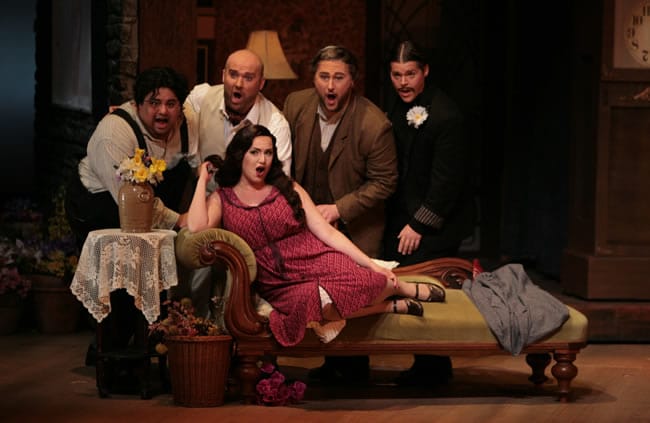 L’Heure Espagnole was unknown to me before this production. It’s a chamber work of absolute confection without the goo, and the company went for a truly funny and over-the-top interpretation. Kate Allen is delightful as Concepción, the sultry, languorous and much-ignored wife of a busy Toledo clockmaker. Her singing seems effortless. This singer-actress has displayed a marvelous range at Castleton, from her faithful, tormented Suzuki in last year’s Madame Butterfly to this contemporary free-wheeling woman, conveying both the character’s restlessness and her sparkling curiosity. When the clockmaker leaves to attend to the town’s official clocks, the bored housewife amuses herself with passersby. Tyler Nelson, who was arresting last year as the ultra-serious Ottavio in Don Giovanni, here pulls out all the stops in a comic role that reminds me of the dandy Dalí played as a young Nathan Lane. In this role, his vocal agility is matched by an astounding and hysterically funny physical inventiveness. He arrives on a bicycle with an extravagant bouquet, pivots, flops, pounces up on a desk like a cat, and blind-staggers when he’s pushed under a tablecloth. This poet-song writer, distracted at every turn, swoons over his own prolific eloquence, but it turn out in other love matters he either lacks the focus or the stamina. Concepción next succumbs to the powerful ardor of the banker Don Iñigo Gomez but not before she puts him off and he gets himself stuck in a grandfather clock. Tyler Simpson is an accomplished bass-baritone who also returns from last year’s success as Leporello in Castleton’s acclaimed Don Giovanni. He can make his characters at once buffoonish and sympathetic as he does here and with his clear, confident voice and dramatic sensibilities. Meanwhile, Concepción is getting desperate and running ragged, hiding her various suitors. “One lover lacks style, the other can’t get to the point!” she sings in French. Ben Bloomfield plays Ramiro, the mule driver, the third and most unlikely lover. But Concepción discovers in his show of physical strength matched by good-humored attentiveness to her whims that he offers what neither words nor money can buy. Cris Fricso has to play the preoccupied and therefore cuckolded husband but he does so with grace and good humor. It’s all classic comic business – lovers hiding and popping out unexpectedly, amorous advances pushed off by a beautiful woman, scurrying up and down stairs – which Tucci and her delightful band of singer-actors milk for all its worth. Percacciolo keeps the orchestra racing along, including punctuations of clocks ticking. All builds to a happy quintet and delightful end.     L’articolo completo su http://dctheatrescene.com/2015/07/14/justice-ruth-bader-ginsburg-a-highlight-at-castleton-festival/